Direct mail is still holding its own when it comes to marketing channels, despite the abundance of digital advertising media. If you’re a business owner trying to find ways of reaching your customers effectively, you may think direct mail is lagging behind its online rivals – but this couldn’t be further from the truth. 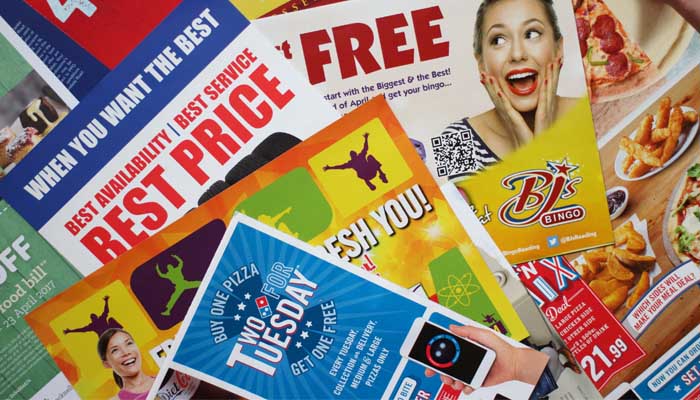 New research shows direct mail is more than a match for social media and online display ads in terms of return on investment and response rate.

A survey of business owners by the Data and Marketing Association revealed direct mail offers an average ROI of 29%, compared with 30% on social media and 16% from online display ads.

What’s more, The World Health Organisation has confirmed mail and packages do not transmit the coronavirus, a statement that has further boosted the current popularity of direct mail.

Why is direct mail marketing so successful?

The reason is simple: direct mail is an ideal way to reach your audience, attract their attention with some great marketing ideas and connect with them on a more personal level. The study goes on to say that direct mail’s response rate is 5.3% for leaflets sent to people’s homes, compared with a response rate of 0.6% to email marketing.

Direct mail is thriving, especially during the Covid-19 pandemic, as research shows people are suffering from “digital fatigue”. With internet and social media use at an all-time high, due to thousands of people working from home or on furlough during the lockdowns, consumer behaviour is changing.

After being bombarded with so much digital advertising, many say they are quickly scrolling through social media or only briefly scanning their email inbox because it’s becoming too much to take in.

Receiving direct mail has become a welcome relief for some people. Seeing a brightly coloured leaflet or envelope dropping through their letterbox, often with a personalised message, represents the extra care and attention.

A mailing shot printed on high-quality materials seems less “throwaway” than an email or digital ad, making customers feel more valued because of the time and effort that has gone into sending it through the post. Making sure your database is updated and organised is vital, as this ensures your target audience receives marketing material they want to see.

Successful direct mail marketing campaigns often include a promotion such as a voucher, a sale, or some type of other giveaway. This adds value to the product, encouraging customers to want to make a purchase.

Some campaigns involve the customer physically going to the supermarket with a voucher to scan for money off your product, or an additional freebie if they make a purchase. Others involve making an online purchase. Both approaches will add value to your product.

It’s also beneficial to make your offer time-limited, so recipients will buy now, rather than putting your leaflet away in a drawer to use later – potentially forgetting about it!

One of the most unusual and innovative examples of direct mail marketing was launched in 2017, when Smart sent out the “Mail Helmet” to highlight the car maker’s commitment to innovation and being a “green” company. It was aimed at publicising the manufacturer’s new range of Smart bikes in Mexico.

Recipients received a “flat pack” though the post, enabling them to build their own unique Smart helmet to wear when cycling on an e-bike. The flat box was made from recycled cardboard, promoting the brand’s green message further. Pop-out pieces could easily be assembled into an ecological bike helmet.

It was a successful and unique campaign because despite not everyone using the helmet, it provided an unusual novelty item. This got people talking about the brand and the helmet on social media, publicising Smart’s latest product.

The Vancouver-based musicians started work on their pop-up record player project in 2009, with the aim of sending out the finished product to advertising agencies to promote their high-quality sound production services.

Unsurprisingly, the folding cardboard record player campaign went viral, creating a massive buzz of attention for the company and capturing the ad agencies’ imagination too.

The tech experts at GGRP spent a lot of time trying out different designs and materials to get the audio right and the eventual sound quality was described as “shockingly good”. It played 45rpm singles and was a great example of the traditional meeting the new.

Chocolate manufacturer Nestle devised an excellent direct mail campaign in 2012 to promote its KitKat Chunky bar, designing a bright red, eye-catching, familiar-looking leaflet that resembled those left by Royal Mail if you’re out when they try to deliver a parcel.

The flyer communicated the “chunkiness” of the new chocolate bar, telling the recipient their KitKat couldn’t be posted because it was “too chunky” for the letterbox. Giving the recipients a free KitKat, to be collected at a local store; the likelihood was they would get the free bar and probably buy a couple more while they were at it.

It was a huge success because copying a missed delivery note was an act of genius. Not only did householders make a point of reading the card, but the Royal Mail design subconsciously created a sense of trust, loyalty and confidence, as it is such a well-known brand.

The free chocolate bar was the icing on the cake!

In 2009, environmental organisation Green Belgium organised a direct mail campaign to promote World Water Day. The innovative campaign set new standards in the charity sector, as it promoted the importance of clean, fresh water for everyone through a bright blue mailing shot.

It wasn’t immediately clear what it was advertising, as instructions on the package invited recipients to hold it under running water. When they did so, it turned out to be so much more than an ordinary piece of paper, as it began to change colour and the real message on the card showed through.

Due to natural human curiosity, it was a huge success. Receiving a piece of paper and being told to run it under the tap created an air of mystery far more compelling than simply seeing a leaflet that said, “World Water Day”.

Even if people didn’t act on the message right away by donating money to the charity cause, the information certainly stuck in their mind and made people more familiar with Green Belgium’s aims and objectives.

Skoda had designed the card with built-in hidden magnets. As the recipient put the third car on the front image, the magnets automatically moved it into the parking space between the two existing cars – demonstrating the value of the driver-assist technology.

It was so successful because the card was as innovative as the driver-assist feature and a lot of thought had gone into creating a clever and well-executed interactive postcard, conveying a useful message without the need for words. All you had to do was perform a simple, yet fascinating, task.

Although the examples mentioned within this article cite bigger companies, direct mail marketing works just as well for SMEs when handled by experts. Give it a try – you’ll be glad you did!