The History of the Postman’s Uniform | Blog | Selectabase

The History of the Postman’s Uniform

A postman walking up the garden path has been a familiar sight for more than 200 years. Today, postmen and women have been allowed to adopt a more casual uniform including shorts and polo shirts, but this hasn’t always been the case.

In the early years, the postie’s uniform was very formal, featuring tailored coats in regal red and smart hats. Over the years, there have been many changes, before the uniform reached its current “smart but casual” look. 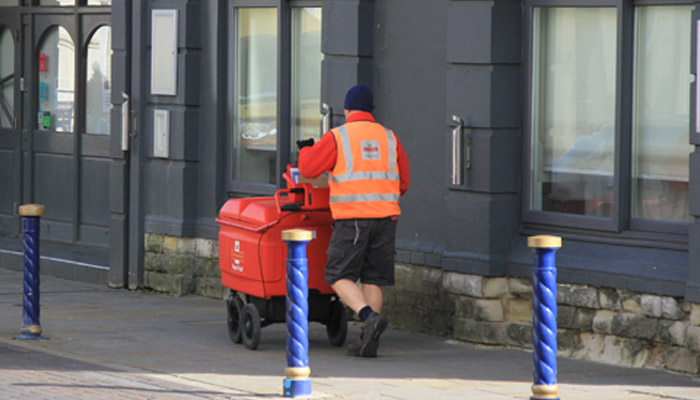 The first postal uniform was designed in 1784, although it was created for mail coach guards, almost a decade before the first postman hit the streets of Britain. The coach guard uniform consisted of a smart scarlet coat decorated with gold braid, and a contrasting black top hat with a gold band.

In 1793, the first postman’s uniform was unveiled for London General Post employees to celebrate the birthday of Queen Charlotte, the wife of King George III. Like the coach guards’ uniform, it was scarlet, consisting of a tailcoat with contrasting blue cuffs and lapels. The coat had brass buttons engraved with the wearer’s staff number. They also wore a blue waistcoat and a hat.

Red was considered to be a regal colour, linked to the royal family and the British flag. It was deemed fitting that Royal Mail employees would wear a bright red outfit, due to the royal endorsement, but instead of thinking of postmen as being regal, the public nicknamed them “robins” – thinking they resembled the red-breasted bird associated with Christmas! As people waited for the postie to arrive, especially when they were awaiting Christmas cards, they would lookout for the “robin” walking up the path.

As a result, the image of the postman became so associated with Christmas that early greetings cards often featured a picture of him wearing his scarlet coat, carrying a sack of mail. This led to drawings of actual robins appearing on Christmas cards, and marked the beginning the bird’s traditional link with the festive period.

Initially, only postmen in London were issued with uniforms. This was the case until 1834, when uniforms were finally launched for posties in Britain’s larger cities. In 1837, there was a major uniform change, when the traditional red coat was dropped for the first time. It was replaced with a blue coat with red collar, a blue vest and a beaver hat.

The coats were smart tail coats until 1855, when they were replaced by a skirted frock coat. Once again, the colour reverted to scarlet. The wearing of uniforms was spreading across Great Britain by this time. Displaying the wearer’s employment ID number was commonplace, although it was no longer engraved on the coat buttons. Instead, it was worn on the collar.

In 1859, a hard felt hat replaced the beaver hat of the early 19th century. The felt hat lasted only three years, to be replaced again, in 1862, by a peaked shako hat – a tall, cylindrical, military cap.

The Victorian era saw a number of changes in uniforms, including the introduction of additional items. Most notably, a waterproof cape was launched to protect the wearer from inclement weather and to stop the smart coat underneath from getting dirty.

For the first time, grey trousers were included in the uniform – prior to this, postmen had been required to provide their own trousers, but this had led to employees who didn’t have much money being the butt of colleagues’ jokes because of their poor-quality trousers, according to some reports. The smart grey trousers made everyone the same.

In the 1860s, the practice of embroidering the initials “GPO” (General Post Office) underneath the wearer’s employee number became the norm. A new waistcoat was launched to match the coat in the same shade of blue.

New winter trousers, this time in blue cloth with a red stripe down the outer seam, also became part of the uniform in the same decade. A military-style tunic replaced the fancy frock coat in 1868. This style barely changed until 1910.

During the 19th century, the vast majority of post-delivery workers were male. The number of females wasn’t documented, but reports suggested it was only a handful. However, by the 1890s, more women applied to become posties. As a result, in 1894, the first official postwoman’s uniform was issued: a waterproof cape and skirt.

The number of postwomen remained low until the outbreak of World War I in 1914, when the men were away fighting in the armed forces. Suddenly, thousands of women and girls were employed to deliver the mail, replacing their male counterparts.

A new, full uniform for women was introduced, consisting of a blue serge skirt and coat and a straw hat, also in blue. After the war ended in 1918, women continued to be employed and had their own uniform, which was continually updated like the men’s.

The postwomen’s straw hat was replaced by a blue felt hat in 1929. During World War II, further changes took place in the women’s uniform. The felt hat was replaced in 1941 by a peaked cap. The same year, women were permitted to wear the official trousers for the first time.

Uniforms began to echo the developments of the men’s uniform, although women had the option of wearing a skirt or culottes, if they preferred these to trousers. A range of maternity wear was also introduced to the uniform in the 1940s.

In the early 20th century, the official Committee on Uniforms introduced ranking grades for postal workers for the first time, ending the distinction between London employees and those in the rest of the UK.

Class one workers were those who had supervisory duties and they were given the highest standard of uniform. Class two staff included sorting office doorkeepers; whose uniform was superior to the remaining grades. Postmen and postwomen were class three staff.

The men’s uniform evolved from the traditional tunic-style jacket to a less formal design, based on a civilian lounge jacket, without the old-fashioned red collar and cuffs.

Over the past 50 years, postmen and women have benefited from increasingly modern and practical uniforms. It seems hard to imagine that at one time, postmen wore formal dress coats and top hats! Fleeces, shorts and light, waterproof, all-weather uniforms have made their life easier and equipped them for cold weather, heatwaves and rain.

The last major update of the 20th century took place in 1999, when £50 million was spent on a complete uniform redesign. The current uniform is the result of the last upgrade to date, in 2008. Postmen and women who cycle are now provided with branded cycling helmets.

Trousers with pockets that hold mobile devices, enable them to log deliveries and help customers track their parcels and letters. The uniforms are aimed at keeping postmen and women warm and dry, no matter the weather.

Palmtop computers make their lives easier, enabling them to trace sent items and allowing customers to sign online for delivered mail instantly. A survey of Royal Mail staff revealed 80% of respondents were “proud” to wear the modern uniforms.

The postal service is one of Britain’s most historic institutions. It was named the Royal Mail because it was built as a safe and reliable distribution system for royal and government documents. The office of Postmaster General was created in 1661 to oversee the work of the General Post Office.

When you’re running a business, don’t let posting mail detract from your other tasks. If you need bulk mailing, direct mailing, or a host of other professional mailing services, call Selectabase on 01304 383838 for further information.