WWII: A letter from Home

Letters from home were extremely important to the armed forces during World War II, but communication was difficult before the days of email and instant messaging. A letter from home would boost morale, making servicemen feel less lonely, while returning a sense of normality to their life.

Family and friends were encouraged to write letters that talked about basic day-to-day life at home. Small things, such as a trip to the shops and a chat with a friend, or events like a child’s birthday, would remind the soldiers they had something to look forward to after the war. It was said that the importance of mail to the armed forces during the Second World War was second only to food. 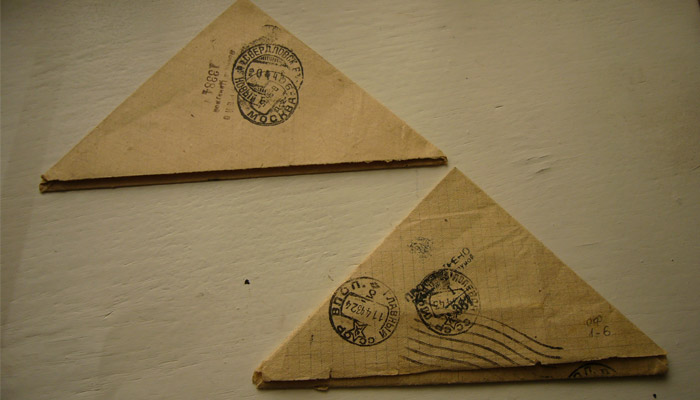 The need for communication during the enforced separation was immense. For some family members and sweethearts back home, letters from the Frontline would take on a new and poignant significance.

A letter from a father, brother or husband, subsequently killed in battle, might be the final connection he had with his family. The imminent danger and the uncertainty of war made letter writing all the more important. People could convey feelings and emotions they might normally reserve for special face-to-face occasions, to assure the recipient of their continued love and support.

Long-distance romances were common during the war. Spouses, fiancés and sweethearts adjusted to the separation and used letters to keep the romance going.

Letters would keep the troops informed about life back home and the detailed accounts of ordinary daily occurrences enabled them to enjoy that all-important link to their family. Corresponding could strengthen new relationships, as strong bonds were built up that would fend off loneliness and boredom.

Military officials understood the important role that letters played in keeping morale high. They liaised with mail service operators to ensure communication could continue effectively throughout the war.

In the United States, the Office of War Information, the Advertising Council and commercial businesses supported a service called Victory Mail or V-Mail for the armed forces.

Introduced in 1942, when everyone was urged to contribute towards the war effort in any way they could, this included transporters saving cargo space for mail sent to and from the war zones. It became the primary means of corresponding with troops from the US who were stationed abroad.

Planes full of mail were requisitioned to fly all over the world, carrying millions of letters from home to the distant battle zones and vice-versa. Giant mail bags were used, which could carry up to 136,000 letters each!

In the United States, the letters being sent to the war zones went through a process that speeded up their arrival. Each letter was transferred on to a tiny strip of film. It took less space on the aircraft to carry the letters in this format.

Once they arrived at the battle zones, automatic machines would enlarge the letters from 16mm negatives to a five-inch by four-inch print. These strips of prints would then be cut into individual letters, which were folded by automated machines and put into envelopes. One laboratory could handle more than 300,000 letters per day!

There was also a censorship department, where any comments that revealed vital military information were cut out. Troops overseas would then receive their letters at mail call.

Just about every transport plane that flew across the Atlantic would carry a quota of V-Mail. Using this system, letters from home could reach servicemen in every theatre of war in a matter of a few days.

In the UK, the mail was handled by the Home Postal Depot RE, established in 1939 in London. It later moved to GPO Reading and was finally relocated to GPO Bournemouth. This meant the sorting office was nearer to the Continent and provided a more efficient service for personnel of the British Expeditionary Force on active duty in France and Belgium.

Mail sent from the war zones would be addressed to “APO England”. The depot’s responsibility was to collect, sort and despatch the military mail to its destination, although it was also used as a Records Office.

During World War II, 3,000 people worked at the depot, with 48% of them being Auxiliary Territorial Service members, combined with civilian personnel. Manual tasks, such as carrying heavy postal sacks, were frequently carried out by Conscientious Objectors.

Designated General Post Office trains and road services transported the vast amount of mail to the Army Postal Distribution Centres across Britain. Mail being sent by loved ones to the troops overseas left the UK via the ports at Bristol, Liverpool, Glasgow and Poole and the Midlands’ airfields.

According to Paul Fussell, the American literary historian, letters from home kept the troops going. At the age of 20, he was a second lieutenant with the US Army’s 103rd Infantry Division. Wounded while on active service in Alsace, he received the Bronze Star and Purple Heart awards for bravery.

Writing after the war, he said, “Letters were a great comfort and the mail was indispensable. We couldn’t have won the war without it. Mail call, whenever it happened, was a delight.”

On 11th November, the Selectabase team will be observing the 2-minute silence as a mark of our respect for the brave men and women who gave their lives to protect the freedom of future generations. We will remember them.