The Most Important Letter in History | Blog | Selectabase

The Most Important Letter in History

Considering around 14.4 billion letters are sent each year in the UK alone, the question of which is the most important letter in history is absolutely huge! Of course, there’s no clear-cut answer and choosing such a letter is purely subjective. 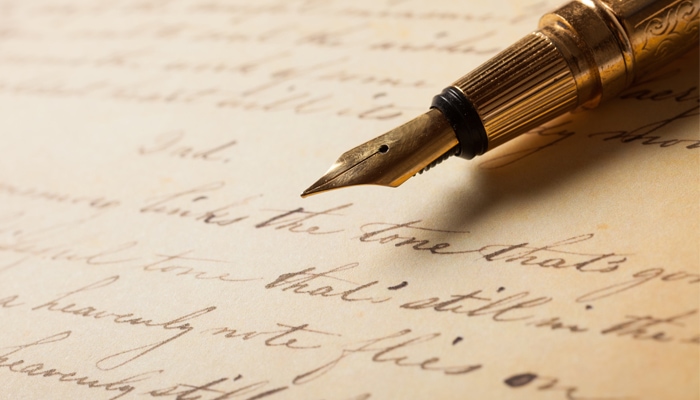 Over the years, various prominent individuals have picked the letter they believe to be the most important ever written. Some famous letters crop up time after time as being historically significant.

In April 1963, civil rights campaigner Martin Luther King Jr wrote a letter from the jail in Birmingham, Alabama, where he was imprisoned for participating in non-violent protests against segregation. His letter has been cited as the most important in history by numerous people, including the Martin Luther King Institute’s founding director, Clayborne Carson.

He drafted the open letter in fragments in his cell before any major civil rights legislation was on the table. Written on the edges of newspapers and on scraps of wastepaper, which his supporters painstakingly pieced together afterwards “like a jigsaw”, the text has been recognised as the 20th century’s most influential letter about civil disobedience.

It serves as a reminder that “injustice anywhere is a threat to justice everywhere” – a message as relevant today as it was in 1963. It became an important element of the American Civil Rights Movement.

Defending non-violent resistance to racism, Luther King wrote, “I am in Birmingham because injustice is here … I cannot sit idly by in Atlanta and not be concerned about what happens in Birmingham.”

The letter was first published in its entirety in the June 1963 issue of Liberation. It was reprinted 50 times between 1964 and 1996 in 325 editions of publications for use in college-level courses. Due to the way it was written, on fragments of paper, it wasn’t possible to put the original letter on permanent display.

The first letter ever written was believed to be one sent by Queen Atossa of Persia in around 500 BC. It has been cited as the most important letter of all time by history and humanities professor Bríd McGrath, of Trinity College, Dublin.

Born in 550 BC, Atossa became queen at the age of 28. Meaning “skilled or learned”, her name echoed the fact she was well-educated and could read and write. She was a strong woman, with plenty of influence.

According to the ancient historian Hellanicus, Atossa wrote the first documented letter, or epistle, when she was around 50 years old. Unfortunately, there is no record of its contents. However, Prof McGrath stated it was important because it “established the genre”.

People wanted to become literate to emulate the queen. It made letters a “normal and effective” form of long-distance communication, says McGrath. Over time, it created whole industries for the manufacture of writing materials and eventually formed the basis for the postal service that is still flourishing today.

In May 1940, after Winston Churchill became Prime Minister, he was put under pressure almost immediately to come to an agreement with Adolf Hitler to end the war. His assistant, private secretary Eliot Crawshay-Williams, advised that Britain should negotiate the “best peace terms possible”. He suggested if we didn’t do so, we would find ourselves invaded by Germany.

Had Churchill bowed to these views and given in to Hitler’s demands, European history would have been completely rewritten. The PM hand-wrote a reply to Crawshay-Williams and responded, “I am ashamed of you for writing such a letter.” It seemed to make Churchill more determined to defeat Germany.

He returned the letter to the assistant private secretary, suggesting he should “burn it and forget”. Apparently, his advice wasn’t heeded. The original letter and Churchill’s curt reply were sold together to a collector at auction at Christie’s for £34,850 in 2010.

British poet Siegfried Sassoon was serving as a soldier during World War I when he wrote an open letter to British military leaders in 1917. The 31-year-old believed the war was being “deliberately prolonged by the people who had the power to end it”.

Serving with the Royal Welsh Fusiliers in France and Palestine, he earned the Military Cross for valour. He was wounded twice and while on convalescent leave, he wrote an open letter, saying he would refuse to return to the trenches.

He declared his letter an “act of wilful defiance of military authority”, saying he was “acting on behalf of soldiers”. He felt the “war of defence and liberation” that he had entered had become a “war of aggression and conquest” and believed its conclusion was “attainable by negotiation”. He added he could “no longer be a party” to prolonging the “sufferings of the troops”.

His letter was printed in the Bradford Pioneer on 27th July 1917 and in The Times four days later. Read publicly in the House of Commons, it caused a massive stir. His own bravery was never in doubt – during his periods of duty on the Western Front, he was exceptionally brave. He single-handedly captured a German trench on the Hindenburg Line.

Whereas in the past, soldiers who refused to go to the front line would have faced a court-martial, Sassoon was examined by doctors and declared mentally ill. He was, therefore, unfit to face a court-martial and instead was sent to Craiglockhart War Hospital, near Edinburgh, where he was treated for shell-shock.

His letter highlighted the mental problems caused by shellshock (known today as Post Traumatic Stress Disorder) to the military authorities, the medical profession and the general public. The University of Cambridge purchased a collection of Sassoon’s letters, including A Soldier’s Declaration, for the university library in 2009.

The German-born theoretical physicist Albert Einstein is credited with spurring the US government’s nuclear research. In 1939, the 60-year-old renowned scientist, who developed the theory of relativity, wrote a letter to the American president, Franklin D Roosevelt, stating that an atomic bomb was a possibility and that Germany could already be trying to build one.

This was the trigger that moved nuclear energy from the annals of science to the forefront of public consciousness. Einstein was the world’s leading physicist, who had won the Nobel Prize. He had left Germany in the 1930s with the rise of Nazism and fled to the US.

In his letter to Roosevelt, Einstein wrote, “It may be possible to set up a nuclear chain reaction in a large mass of uranium”. He explained this would generate “vast amounts of power and large quantities of new radium-like elements”.

He advised it would be prudent to have some “permanent contact” between the government and the “group of physicists working on chain reactions in America”. President Roosevelt subsequently told his military adviser, General Edwin Watson, “This requires action.”

Einstein was a pacifist and had been in a dilemma about whether to tell the American government about Hitler’s nuclear programme. Germany didn’t use nuclear weapons during the war after all and the nation’s nuclear plant was destroyed in 1943 by an air raid.

Einstein reportedly told Newsweek magazine in 1947, that had he known the Germans would be unsuccessful in developing an atomic bomb, he would have done nothing, as his letter to the president had kick-started the atomic age.

Today, the letter is available to view digitally in the archives of the Franklin D Roosevelt Presidential Library and Museum in New York.