VE Day: Letters from Loved Ones

People all over the world are preparing to celebrate the 75th anniversary of Victory in Europe Day on Friday 8th May. Every year, we mark the end of the conflict in Europe in 1945, as the Second World War drew to a close. The event remembers the Allies’ formal acceptance of Nazi Germany’s unconditional surrender on Tuesday 8th May 1945.

When Germany was defeated, celebrations erupted throughout the western world. In Britain, crowds gathered in the streets to party. 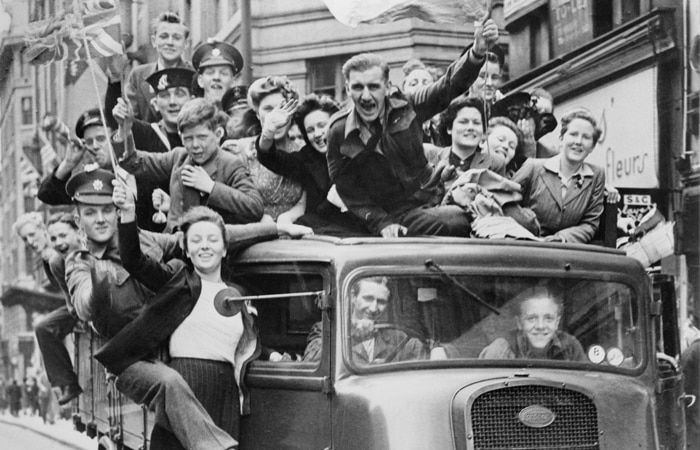 Marking the end of six long years of war, austerity and tragedy, VE Day celebrations took place in the streets and in Trafalgar Square elated crowds hugged, danced and sang patriotic songs, while revellers partied by jumping into fountains and climbing monuments in a huge outpouring of emotions.

Although the war in Japan continued until 15th August 1945, for thousands of people, VE Day was the light at the end of the tunnel. Led by Prime Minister Winston Churchill, Britain had survived some of the darkest days in history.

People in the United States also celebrate VE Day and the part the American Armed Forces played in the Allied victory. The National World War II Museum, in New Orleans, is home to a fascinating collection of letters dating from the war, some of which describe, in vivid detail, the VE Day celebrations in London.

One such letter was written by American serviceman Sergeant Richard Merritt, who had a 48-hour pass to visit London with his friend, Bob Campbell, from their airbase at Bury St Edmunds. They were support staff with the 364th Fighter Group, 8th Air Force.

Sergeant Merritt wrote a ten-page letter to his parents describing his experiences in the capital on such a jubilant occasion. After arriving in London on the Underground, they immediately became immersed in the crowds. The Brits excitedly grabbed them, started dancing and singing “Yankee Doodle” and “God Bless America”.

He described how they felt like official representatives of the US and had a “smashing time”. Piccadilly was a “solid mass of Allied humanity”, where it was possible only to “sway with the crowd”! People were hanging out of windows and from street lamps, with streamers blowing in the breeze.

“Flags and bunting of the United Nations covered every building,” Sergeant Merritt wrote. “Fireworks were being shot off sporadically!”

At the UK’s Surrey History Centre, more VE Day letters are carefully preserved, including one from Marjorie Kelsey, of Redhill, who poured out her feelings in a letter to her husband William, who was in the army.

She began the letter by saying, “This is a very happy day – VE Day! My darling … now we can really start making plans for the lovely future we shall spend together.”

She described how “lots of soldiers and girls were dancing in the street by the lights”. Following the gloomy blackout (when no lights could be lit after dark in case they became targets for the German bombers), Marjorie said, “We knew for sure then that victory in Europe was here.”

Back in 1945, letters were the way thousands of servicemen kept in touch with loved ones back home. Long before email, texts, social media and other forms of digital communication, the Post Office was a vital link between soldiers on the frontline and their family and friends back in Britain. Receiving a letter was a great morale-booster for servicemen.

Ordinary men and women worked at the sorting offices, under constant threat of aerial bombardment, to ensure the mail got through. In May 1940, the Secretary of State for War, Sir Anthony Eden, broadcast an appeal to British men who were too young or too old to join the forces to become a Local Defence Volunteer. Postal workers formed their own battalions to defend their Post Office buildings against a possible enemy ground-level attack.

Despite the hardships of war, any mail delayed by enemy action was delivered by the Post Office within 48 hours. Postbags containing tens of thousands of letters were flown out from the UK to the troops on the Frontline to keep their spirits up, as the government realised the importance of receiving a letter.

While VE Day celebrations have taken place every year since the end of the war, the 75th anniversary is something everyone has been looking forward to. Friday 8th May was made a public holiday and the plan was to enjoy a multitude of activities, including street parties.

However, unfortunately, the COVID-19 pandemic and lockdown have put a stop to the planned gatherings. Instead, the Royal British Legion is calling on people to mark the 75th anniversary from home.

A statement from the charity said the nation would be paying tribute to the “service and sacrifice” made by the entire second world war generation including British, Allied and Commonwealth Forces and those who served on the home front. In light of the current emergency situation, the RBL said it was particularly important to “unite in recognition of service to the nation, just as communities did 75 years ago”.

Among the planned virtual events for 8th May are a VE Day 75 live stream, a UK-wide singalong to Dame Vera Lynn’s famous wartime song, We’ll Meet Again, at 9pm and a two-minute silence at 11am.

While the two-minute silence is being held to remember all those who lost their life, from all sides, in the conflict, the RBL is also urging people to use it as a time for reflection on the impact that COVID-19 has had on people across the world.

Even in today’s modern digital era, never underestimate the importance of the written word in your marketing campaigns. Our direct mailing services are among the most successful ways to advertise your business. Contact Selectabase on 01304 383838 for details.