The luxury cruise liner, RMS Titanic, will forever be remembered for the human tragedy that occurred after she hit an iceberg, causing the deaths of more than 1,500 passengers and crew in the biggest peacetime maritime disaster in history.

What many people may not know is that the ship was also an official carrier of mail – hence the prefix RMS. This stood for Royal Mail Steamer, although later mail-carrying vessels were known as Royal Mail Ships. There was a post office on board the Titanic – and sadly, the postal workers were among those who lost their lives. 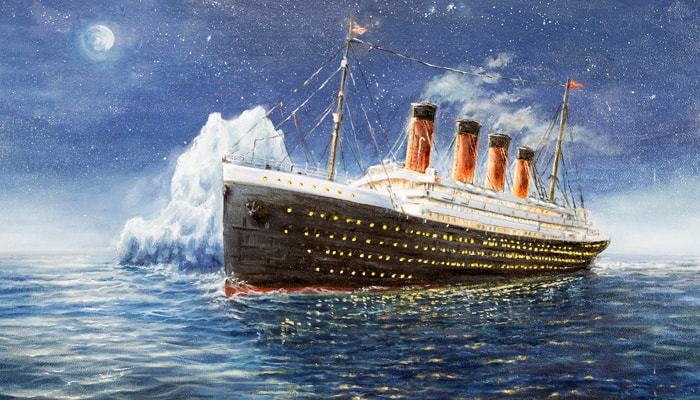 The White Star Line vessel had been described as “unsinkable” when she set sail on her maiden voyage from Southampton to New York City on 10th April 1912, with 2,224 passengers and crew on board.

Tragedy struck on 14th April, when she collided with a giant iceberg, estimated to be up to 400ft long and 100ft high, in the North Atlantic. The impact caused a massive 300ft long hole in the ship’s hull – the RMS Titanic vanished beneath the waves on 15th April.

For the postal workers onboard the RMS Titanic, the maiden voyage of such a mighty cruise liner would have been an exciting time.

As a ship contracted to carry mail, the Titanic had its own Post Office and mailroom, on decks F and G respectively, deep in the ship. The Postal Museum, based in Phoenix Place, London, has the original blueprint of the Titanic’s layout, showing their position.

British citizens John Richard Jago Smith and James Williamson were among the postal workers who set out on the fateful voyage, 109 years ago. Smith was a 35-year-old postal clerk, born in 1877 and brought up in the village of Lanarth, near St Keverne, Cornwall. The farmer’s son became a post office employee in the late 19th century, working at the Southampton branch of the Post Office by the early 1900s.

He was deployed to work for the sea post department, sorting the overseas mail. His department was asked to supply clerks for the White Star Line to carry out Post Office duties, including sorting the mail, onboard the ships. He was chosen to work on the Titanic’s maiden voyage.

His colleague from the Southampton office, Williamson, 35, was also deployed on the luxury liner. One of 11 siblings born in Dublin, Ireland, he began his Post Office career in 1894. He was a sorter at the General Post Office in Dublin in 1901.

Three American postal employees worked alongside their British counterparts on the Titanic. They were William Logan Gwinn, Oscar Scott Woody and John Starr March. Gwinn, 37, hailed from Manhattan, New York. The postal clerk was married to Florence and they had two young children, aged three and one.

In 1912, visiting England, he received word his wife was ill. He was booked to sail back to the US on the Philadelphia but chose to work his way back in the post room of the Titanic instead, as it was due to dock sooner.

Woody, a married postal clerk, from Roxboro, North Carolina, was due to celebrate his 41st birthday on 15th April. He had worked on the European vessel, Kaiser Wilhelm der Grosse, sailing across Europe. He arrived in Plymouth and was instructed to join the Titanic on 10th April to sail back to the States.

March, 51, a widowed postal clerk from Middletown, Orange, New York, was the son of an Englishman, Thomas March, who had emigrated to the US in his youth. March Jnr had worked as a postal clerk on the Olympic and the Kaiser Wilhelm der Grosse.

His two daughters had urged him to work on dry land following their mother’s death in 1911, but he enjoyed travelling at sea. He assured his family he would be okay, signing up for the Titanic as the oldest of the five postal clerks.

The post sorting room was located in the fourth watertight compartment of the Titanic, on G Deck. Initially stacked on the Orlop Deck, directly below the sorting room, the post sat with the first-class baggage during the journey.

The postal workers were tasked with sorting the mail brought on board the ship. This was no mean feat, considering there were 3,364 bags and just five sorters. In addition, they dealt with the letters posted onboard the ship by the passengers and crew.

Prior to sailing, a ship inspection took place on 9th April 1912. The sleeping cabins for the post office clerks were situated in third class. However, the inspectors noted it was very noisy down there, among what they described as “mostly low class” passengers.

They were said to “keep up noisy conversation throughout the silent hours”, while playing “instrumental music” and singing. The inspectors suggested a lack of sleep would impair the postal clerks’ ability to do their job. “It is essential they should enjoy a decent sleep at night,” they concluded.

As a result, the postal workers were moved to alternative accommodation in a quieter part of the ship and were also given permission to dine privately, rather than with the third class passengers.

Dedicated to the end

On the night of the tragedy, when the Titanic struck the iceberg, the postal workers had been celebrating Woody’s birthday. However, on realising the mailroom was flooding, they attempted to move 200 sacks of mail to the upper decks to save them.

They asked some of the stewards to help them. One steward who survived the tragedy later recalled how he had urged the postal workers to leave their work due to the severity of the situation. “They shook their heads and continued their work,” he wrote.

All the clerks tried to carry the 100 lb bags of mail from Orlop Deck to the higher level on G Deck. However, after only five minutes, the water on G deck was already rising and their task appeared doomed, especially due to the weight of the full bags.

Jago ran upstairs and reported the state of affairs to Fourth Officer Joseph Boxhall, who went below to assess the damage. Jago then reported the situation to the captain, Edward Smith, before returning to the sorting office, where the water was already 2ft deep.

Still, the postal clerks struggled on, attempting to take the mail higher up to the D Deck. They believed the mail might be saved if it could be taken off the ship via the first-class entrance, but this didn’t happen.

Sadly, the postal clerks’ dedication to their duty was to prove fatal. The steward said either an “inrush of water” or the subsequent explosion had cut off their escape. “I saw them no more,” he added.

On receiving word, via telegram, that the Titanic was in danger, Post Office bosses in London were concerned for the wellbeing of their employees. The PO was a pioneer of telegraph technology and had wireless equipment and two operators on board the Titanic, supplied by the Marconi company.

Guglielmo Marconi, the Italian-born pioneer of wireless telegraphy, has been cited as being responsible for saving many of the passengers. Thanks to his technology, operators Jack Phillips and Harold Bride sent an all-stations distress call. This led to the Carpathia being the first rescue ship to arrive on the scene to collect survivors from the ocean, over a period of several hours.

The owners of the White Star Line, Ismay Imrie & Co, sent three separate telegrams to the Post Office Secretary to allay fears – but sadly, two of them contained incorrect information.

The first, sent on 15th April, stated that the Virginian was “standing by” the Titanic. It claimed there was “no danger of loss of life”: the second, sent soon afterwards, reiterated everyone was safe, claiming the Titanic was “proceeding to Cape” and that all passengers had been “transferred presumably to Virginian”.

A third telegram, sent on 16th April to the Secretary of the GPO in London, revealed what had really happened. Joseph Bruce Ismay, chairman and MD of the White Star Line, wrote how he was “deeply grieved” that the “steamer had foundered”. He suggested only “about 675 souls, mostly women and children”, had been saved.

Carpathia’s wireless operator Harold Cottam and Bride later transmitted the survivors’ names to the shore, so loved ones could be informed quickly. When it became known that the five postal workers had all died in the tragedy, while carrying out their duties to the end, a memorial was built in Southampton. Part of the verse dedicated to them read: “Steadfast in peril.”

Mail is still carried by steamships, ocean liners, sailing boats, rowing boats and even by hovercraft to this day. In 2020, it was reported how the US Postal Service was sending mail to Europe – for ten different nations, in five containers, with a total weight of more than 72,000 lbs.

Sending mail by sea came to the rescue when the Covid-19 pandemic struck at the beginning of last year. The USPS relied on ships because of limited air transportation options, due to widespread flight cancellations and restrictions.