Robins on Christmas Cards? We Explain!

Britain’s favourite wild bird, the robin, has been appearing on Christmas cards for as long as people can remember. A native UK species, it has been adopted as Britain’s national bird, with its numbers boosted every winter by more robins flying in from Europe.

The diminutive robin likes nothing better than to hop around our garden, eating its favourite diet of seeds and fruits such as apples, blueberries, raspberries, cherries and strawberries. So how did the legend of associating the small, red-breasted bird with Christmas begin? 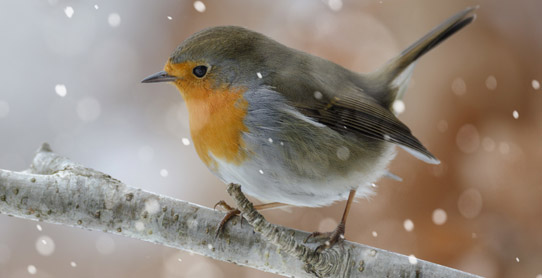 Usually perched on a bough surrounded by snow, with its bright red breast resplendent against the white backdrop, the robin is seen on many Christmas card designs. One fable suggests that the robin’s red breast links it directly to Christianity and baby Jesus.

As the story goes, Jesus was born in the stable, with the log fire lit to keep the cold outhouse warm. A brown robin placed himself between the flames and baby Jesus’s face, fearful the new baby might be burned.

As the robin fluffed out his feathers to protect the baby, they were scorched by the intense heat. It was said that the red colouring was passed on to future generations of robins for all time to mark the bird’s bravery.

Although this explains the Christian theory behind the robin’s colouring, we have to go back to Victorian England to find out why the bird has become such a massive symbol of Christmas.

The tradition of sending Christmas cards began in 1843. Historians believe a man called John Calcott Horsley printed the first Christmas card for his friend, Sir Henry Cole, who had come up with the idea of a seasonal greeting card.

In 1846, 1,000 cards went on sale to the public, at a cost of one shilling each, at a shop called Felix Summerly’s Treasure House, in Bond Street, London. They sold exceptionally well and the tradition of Christmas cards had taken a hold on Britain.

Christmas cards have all sorts of designs including religious scenes depicting the birth of Christ in the stable, Christmas trees, carol singers, the star of Bethlehem, baubles, animals, snow scenes, holly, festive wreaths and gifts, to name but a few. None have taken hold quite so well as the robin redbreast.

Robins didn’t appear as Christmas card designs for another 40 years, until the 1880s, when the Royal Mail postmen wore bright red uniforms. It was thought to be a regal colour that was linked to the British flag and the royal family. As a result of their red garb, early posties were nicknamed “robins”.

Every Christmas, just like today, householders would eagerly await the arrival of the postman, carrying greetings cards from loved ones who lived far away. The mail was delivered by the local “robin” or postman.

As well as depicting religious scenes, Christmas cards began to exhibit hand-drawn illustrations of a postman, cheery and bright in his red jacket, delivering cards. Some artists then decided to draw an actual robin redbreast, instead of its human namesake, carrying the Christmas cards in its beak – hence the idea of the robin’s association with Christmas began.

It caught on very quickly and the robin became a symbol of Christmas – a tradition that continues today, more than 130 years later.

When you need to send a lot of mail, we can help! To achieve maximum reach at minimum cost, the Selectabase bulk mail service is ideal for marketing purposes, and our print and post service will save you time and money. Give us a call on 01304 383838 for further information.

The Selectabase team would like to wish you all a very Merry Christmas and a Happy New Year!