Look what turned up in the Post! | Blog | Selectabase

The postal service remains busy all through the year, handling high volumes of letters and parcels, with even more being sent at Christmas. Despite the digital age, it seems some traditions live on! 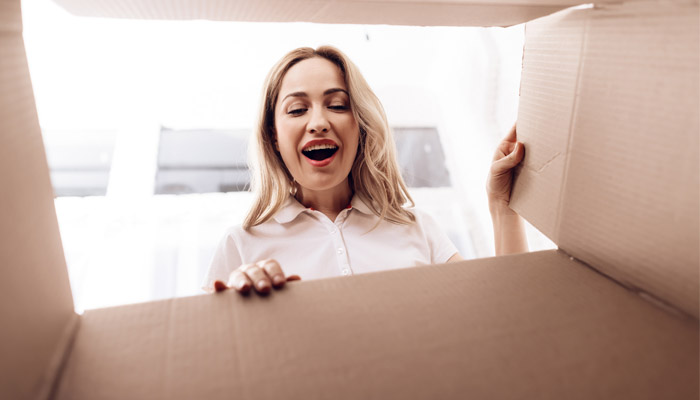 Post office employees have handled some weird and wonderful objects over the years, and perhaps none stranger than “human letters”!

The launch of Parcel Post by Royal Mail in 1883 led to the first packages being sent, and before the service was properly regulated, just about anything could be dispatched through the mail! In fact, many of the strange items have ended up on display at the Postal Museum in London.

There was nothing in the rules that banned the sending of people, so this led to a much-publicised suffragette protest outside 10 Downing Street in 1909.

Keighley-born Elspeth Douglas McClelland, aged 30, and Daisy Solomon (daughter of the famous Scottish suffragette Georgiana Solomon) used the Royal Mail’s same-day courier service to post themselves to Prime Minister Herbert Asquith. They wished to deliver themselves personally to campaign for votes for women.

On 23rd February 1909, both women arrived at the PM’s residence after being posted via the Royal Mail’s same-day Express Messenger service. They were dispatched by fellow suffragettes Jessie Kenney and Christabel Pankhurst from Clement’s Inn, London, for the price of a three-penny stamp.

They had address labels to dispatch them to “The Right Hon H H Asquith, 10 Downing Street, SW” and were “delivered” by a telegraph messenger boy AS Palmer – although he didn’t have to carry them! They were sent by the signed-for service.

The policeman on duty was going to allow them access, but an official came out of 10 Downing Street and accused the women of being “dead letters” – the term for an undelivered item of mail. He refused to sign for them.

Despite their protest that they had been “paid for” and therefore must be delivered, he was unmoved and said they couldn’t be accepted and must be returned to the sender!

They were “returned” to the Women’s Social and Political Union offices, although their stunt gained the publicity they anticipated for their cause, as they made the front page of the Daily Mirror newspaper, which can be seen on the British Postal Museum’s website. The PM was said to be “amused” by their bold actions.

One man and his dog

The women weren’t the first human mail items, although they were the best publicised. Accountant Mr Reginald Bray, from Forest Hill in London, claimed to have posted himself successfully in 1900 and again in 1903. He posted himself and his bicycle on 14th November 1903 by registered post to his bewildered father on Devonshire Road, Forest Hill.

According to author John Tingey, who studied Bray, the accountant was “eccentric” and “just slightly bonkers”. Tingey, born in 1879, wrote a book entitled The Englishman who Posted Himself, which was reprinted in 2010, as it has remained a source of fascination.

Bray was obsessed with the postal service and bought a copy of the Post Office Guide, to see how far he could go in posting unusual items. He found that living creatures could be sent by Express Messenger, on condition they were “larger than a bee” and “smaller than an elephant”. So he first posted himself and his Irish terrier, Bob, in 1900.

By the time of his death in 1939, at the age of 60, Bray had posted an estimated 30,000 items in the mail. Many of them were strange, unwrapped items that tested whether Royal Mail would deliver them, as they included a rabbit skull and a turnip he had dug up in Ireland with the address carved into it.

He also posted a crocheted letter made by his mother, addressed to “Bray, Forest Hill”, and a letter simply addressed to: “The Driver, Locomotive No 133, Caledonian Railway, Glasgow Station”. These were duly delivered.

Some items were deemed too offensive to be delivered: a first edition of the ground-breaking 1922 book Ulysses, by James Joyce, was considered obscene. It related to a day in the life of Leopold Bloom, in Dublin, on 16th June 1904.

Joyce delved into an unprecedented “stream of consciousness” style as the novel described the thoughts, feelings, mood changes and mental reflection of the hero. It was simply too much for the staid early 20th-century society. Royal Mail refused to deliver a copy of the book and it was “returned to sender” with an accompanying letter advising that any further copies sent in the post would be seized.

A letter to Lord Curzon in the House of Lords, with an “abusive” address on the envelope, was also intercepted. The sender had written it to “L Curzon, Rotten Old Fool, House of Lords”, but it was never delivered.

Author David Bramwell and his friend David Robinson, after reading of Bray’s story, spent one year sending unwrapped inanimate objects to each other through the post to see if they would be delivered. They included an apple, a piece of toast, a flip-flop, a pair of men’s boxer shorts and a large leaf, all of which arrived, although the toilet roll they sent unravelled en route and was unsuccessful.

Before the service was regulated in the early 20th century, pretty much anything, living or dead, was sent through the post. Food was often sent, but it was seldom wrapped. Game birds could be sent as long as they had the address label on the neck and didn’t leak, so post office workers often had to handle an assortment of dead birds, still with their feathers unplucked.

Sending living creatures could put post office workers’ lives at risk – a magazine report in the 1890s revealed a jar of live scorpions was undelivered and returned to the Royal Mail offices. Workers who opened it to look for a return address were shocked to find the potentially deadly creatures.

The rules were first tightened up in 1903, with the implementation of the Inland Post Warrant. It said living creatures couldn’t be sent unless the Postmaster General gave his personal permission.

Other banned items included explosives, “indecent or grossly offensive” material, any “noxious” substance, sharp instruments not properly protected and any article that might injure postal workers, or damage any other packages.

A movement dubbed “mail artists” was formed in the 1950s and involved people sending “postal art” through the mailing service.

These aren’t illegal items but are any small-scale artworks such as postcards, collages, recorded music, poetry, artist-created stamps and just about anything in any media that can be created by an artist and sent through the post.

Mail artists interconnect with each other and have created a way of sharing artworks that bypasses traditional distribution systems, such as art galleries, museums and the art market. Mail artists rely on the postal network as the main way of sharing their work, so they’re not dependent on booking official exhibition space.

Strict rules still govern what can be sent through the post and there are many prohibited items, for health and safety reasons.

Some banned items should surely be common sense – but the rules state that “frozen water” can’t be sent, presumably because it melts!

If your business requires bulk mailing to be sent to your client base, take advantage of Selectabase’s professional create and post service.