The Royal Cypher is a monogram-like emblem representing a country’s reigning monarch. Usually consisting of the sovereign’s initials and title, this is often interwoven with a crown. In Commonwealth countries, such as Great Britain, the title is abbreviated to “R” – short for “Rex” or “Regina”, the Latin words for king and queen.

It pops up all over the place – on government buildings, on pillar boxes and stamps, on medals, on royal and state documents, on telephone boxes and around government departments. Dating from the Tudor period in 1485, the Royal Cypher is an iconic symbol in Britain. 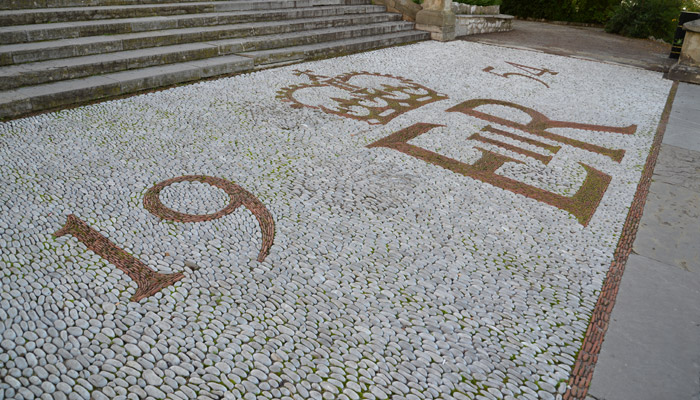 The historic symbol represents the heritage of Britain’s royal family. Today, the most common Royal Cypher that most people recognise is that of Queen Elizabeth II, whose cypher is “EIIR”. This is the abbreviation of “Elizabeth II Regina”.

The “R” was added to the monarch’s cypher in the 16th century, after the reign of Henry VIII. The type of cypher can depict a period in history – for example, when the British monarch also ruled India, during the time of the British Empire, the letter “I” was placed after the “R” – the abbreviation for “imperator” or “imperatrix”, the Latin words for “emperor” or “empress”.

The “I” for Imperatrix was added to the Royal Cypher of Queen Victoria when she became Empress of India in 1877, in a tradition that has spread to other royal houses across the world.

Cyphers are used on thousands of pillar boxes all over Britain – they are a good way of dating them. Each pillar box contains the cypher of the monarch who was in power at the time, so those that were installed before the reign of Queen Elizabeth II will have a different cypher from the more modern ones. Every time the monarch changes, the old pillar boxes with the previous monarch’s cypher are not replaced, so we have ended up with a large array of pillar boxes in Britain of different ages.

In Scotland, most pillar boxes don’t have “EIIR” inscribed on them because the Scots don’t accept that the current monarch is the second Queen Elizabeth, as Queen Elizabeth I never ruled Scotland – during her reign over England and Ireland (from 17th November 1558, until her death on 24th March 1603), she was not the ruler of Scotland.

That honour went to Mary Queen of Scots (also known as Mary I of Scotland, or Mary Stuart), who was monarch of Scotland from 14th December 1542 to 24th July 1567, during a time of political unrest in Britain.

Edward VIII was credited with having his own Royal Cypher – “EVIIIR” – it was never brought into full use. After becoming King of England in 1936, following the death of his father, his Royal Cypher was designed, as was the tradition.

Stamps were produced in his name, as were new postal vehicles and 171 new letterboxes containing the “EVIIIR” cypher, but after he abdicated on 10th December, to marry the American divorcee Wallis Simpson, production of his cypher halted abruptly. He reigned for only 326 days and was one of the shortest-reigning sovereigns in history.

Philatelists are well-versed at recognising the Royal Cypher of each monarch on stamps. Cyphers and crowns are used in stamps’ watermarks as well. This is also a way of dating the stamps, as the designs change. For example, there have been three changes in the watermark during the reign of Queen Elizabeth II.

The Royal Cypher can also be used on the postmark that is stamped on incoming post. It can be resurrected for celebratory events – for example, in 2010, a special postmark was issued to commemorate the 100th anniversary of the accession of King George V, depicting his “GVR” cypher. These have become collectors’ items over the years.

A collection of stamps containing Royal Cyphers through the ages is on display at the Postal Museum in Phoenix Place, London.

Selectabase provides a professional create and post service to help busy working environments. We offer a full range of mail fulfilment services, including bulk mailing, envelope inserting, direct mail and more. Call us on 01304 383838 for details.